Saints in the Orthodox Church

The saints of the church, who are alive in Christ, are not only models whose lives and devotion to God we should strive to emulate, but also are intercessors to God. Individual faithful and parish communities are called upon to take a patron saint, in the tradition of the Holy Orthodox Church. Early churches were built at the site of the graves of many of the Holy Martyrs. These communities were dedicated with the name of the martyr, and he or she was called upon by the community who worshiped there to act as an intercessor and protector for the faithful. Churches today place relics of the saints inside the Altar table as well as in places for veneration in the church in remembrance of these holy men and women in our lives.

About Saint George the Great Martyr 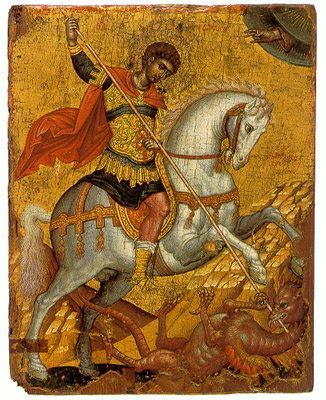 St. George, this truly great and glorious Martyr of Christ, was born of a father from Cappadocia and a mother from Palestine.  Being a military tribune, or chiliarch (that is, a commander of a thousand troops), he was illustrious in battle and highly honored for his courage.  When he learned that the Emperor Diocletian was preparing a persecution of the Christians, Saint George presented himself publicly before the Emperor and denounced him.  When threats and promises could not move him from his steadfast confession, he was put to unheard-of tortures, which he endured with great bravery, overcoming them by his faith and love towards Christ.  By the wondrous signs that took place in his contest, he guided many to the knowledge of the truth, including Queen Alexandra, wife of Diocletian, and was finally beheaded in 296 in Nicomedia.

His sacred remains were taken by his servant from Nicomedia to Palestine, to a town called Lydda, the homeland of his mother, and then were finally transferred to the church which was raised up in his name.  (The translation of the Saint's holy relics to the church in Lydda is commemorated on November 3; Saint Alexandra the Queen, on April 21.)

If April 23 falls on or before Great and Holy Pascha, the Feast of St. George is translated to Bright Monday.

Apolytikion in the Fourth Tone

Liberator of captives, defender of the poor, physician of the sick, and champion of kings, O trophy-bearer, Great Martyr George, intercede with Christ our God that our souls be saved.

Kontakion in the Fourth Tone

Cultivated by God, you became manifest as an honorable tiller gathering for yourself the sheaves of virtue.  For you sowed with tears but reaped with gladness; in the contest you competed with your blood and came away with Christ.  By your intercessions, O Holy One, all are grated forgiveness of sins.

The Life of Saint Basil the Great from the Greek Orthodox Archdiocese of America website: https://www.goarch.org/chapel/saints?contentid=29

Please enter a search term to begin your search.